Both ways, this month.

US purchases of oil and refined products from Venezuela fall to 601,000 barrels a day in February. Other than a couple months of oil strike 10 years ago, the February purchases were the lowest by the US since February 1986, according to the US Energy Information Administration.

Shipments of southbound fuel also slowed dramatically, with conventional gasoline shipments from the US to Venezuela falling to 7,000 barrels a day from 113,000. That’s a 94 percent decline. That, plus the recovery of MTBE shipments (from 0 in January to 22,000 barrels a day in February) indicate Venezuela’s refineries are getting back on line.

I already told you, this guy is just misunderstood. No matter how many times you re-read the article, that won’t change. He did not, repeat not, offer Diosdado Cabello mutual benefits in return for a management contract of Citgo. That was inserted in the mail by someone else. He was hacked, ok? What part of hacked do you and Anthony Weiner’s wife not understand?

Back to our normally scheduled silence…

Messages supposedly sent to Diosdado Cabello, president of Venezuela’s legislature, were disclosed over the weekend on various websites opposed to the Venezuelan government. The hack appears real: the documents attached there would be tough to forge, such as the full report of an opinion poll or internal campaign documents. So far, Cabello himself hasn’t commented publicly on the situation, and he didn’t reply to my e-mail for comment.

The messages are mostly boring. Among my few surprises: some Chavistas write to one another in the ALL CAPS that one finds on less-respectable message boards. And IVAD, a Chavista opinion pollster, uses the insulting term “marginal” for people of lower economic class (see page 6 of linked document)*.

The document that most grabbed my attention was a note from a company called Enfusa, in Puerto Rico. The mails show that CEO Manuel Santos first wrote to offer President Chávez and all his closest deputies access to some doctor who has the secret cure for cancer. Then, March 6, another note, with the subject “Vice president Maduro let President Chávez die” — maybe not the most politically correct thing to say about the country’s new acting president.

But the good one was sent March 12 (my translation): END_OF_DOCUMENT_TOKEN_TO_BE_REPLACED 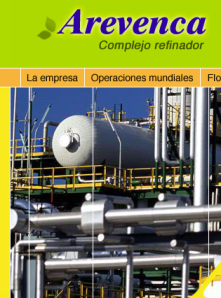 PDVSA, Venezuela’s state oil company, will have to defend itself in US court in a bizarre $100 million case that involves the Venezuelan ambassador to Nigeria, a 2-person law firm in Mississippi, a white-haired Caribbean con man and imaginary tankers full of fuel.

It all started in 2006, when the Nigerian government created a new state fuel import company called Skanga Energy & Marine. Managing Director Christian Imoukhuede approached Venezuelan representatives in his country about buying diesel and gasoline. According to Skanga’s lawsuit, he spoke to Enrique Arrundell, Venezuela’s trade consul, who told him he’d have to work with an agent, rather than buying directly. The agent was a company called Arevenca. END_OF_DOCUMENT_TOKEN_TO_BE_REPLACED 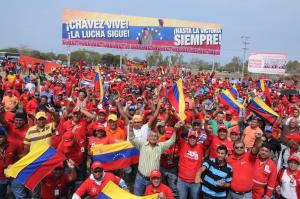 PDVSA, Venezuela’s state oil company, sent a statement at 2:24 pm showing that workers in the western division “continue activities in support of President Nicolas Maduro.” They “reject the violent acts registered in various states of the country that have accounted for the deaths of eight Venezuelans and numerous material damages.”

Then at 4:27 pm, the same company sent a statement saying a small fire in a pump at the Cardón refinery had been controlled.

Reminds me a bit of how the huge pipeline spill in Maturín last year happened on a day when the workers were in Caracas for a political rally, celebrating the 20th anniversary of Hugo Chávez’s failed coup attempt of February 4, 1992.

With apologies to those who might have seen this earlier on my Twitter feed, at @guacamayan, here are a few oddities of the new Chile census figures.

Religion: Fewer than half the people 15-29 in the Bio Bio region declare themselves Roman Catholic. That is the only group in the country where Catholicism fails to make a majority. The bulk of those who aren’t Catholic are Protestant/Evangelical.

Migration: More than 60% of the immigrants from the Dominican Republic, Poland, the Philippines and Russia were female, while more than 60% of those from Pakistan, Iran, Morocco, Saudi Arabia, Turkey, Haiti, Egypt, Lebanon, India and Portugal were male. I don’t see much of a pattern there, except that the Middle East-North Africa group tends to be quite male. END_OF_DOCUMENT_TOKEN_TO_BE_REPLACED

Tommy Humphreys of CEO.ca traveled in Colombia with Frank Giustra and Serafino Iacono. He got rare face time with Iacono, who as chairman of Pacific Rubiales Corp. and a group of mining and infrastructure companies is a particularly alluring subject for media scrutiny. The article is basically positive and ever-so-cheery (“Net net, the future is bright for Colombia, and Fino and Frank’s Blue Pacific is moving along at a rapid pace.” Fino and Frank? Really? And net net? WTF) but heck, there is a place for this stuff. There’s no harm in hearing the founders of a bunch of companies, giving us their pitch. Sure, the pitch is not very heavy on content, but it’s ok, it gives you some sense of how Iacono and Giustra have done well in Colombia.

What makes this article fun are the subtle digs. Like this one.

“Colombia is the longest standing democracy in South America,” Fino tells me, his ever-present security detail hovering ominously at our periphery. “I never feel like I’m in danger here.” END_OF_DOCUMENT_TOKEN_TO_BE_REPLACED

Here is what happened in the last 10 years, in chart form:

These are just the top 10 sources of immigrants — you want the whole list, click here to download. Long story short: Peru, Colombia and Bolivia are sending lots of migrants to Chile, each of those countries more than doubling its migrant populations in Chile. Venezuela also increasing its numbers, but keeping its same rank. The previously dominant Argentine-Chilean population grew more slowly. For all the hype about Spanish immigration to the New World, the numbers don’t reflect any major change in the number of Spaniards in Chile. That is quite different from the number of US-Americans, now over 11,000. The number of Germans fell off a bit, probably because a lot of those immigrants are old and are dying off. And at least one escaped. As a result, El Salvador knocked Germany out of the top 10. As far as movement in the rankings, the big move is from Colombia, up from #10 to #3, with a more than 6-fold rise in population. I am still eagerly awaiting the arrival of a single decent bandeja paisa in Santiago Centro.

UPDATE: Here is a chart of the how many immigrants are in Chile, normalized for the population of their birth countries. 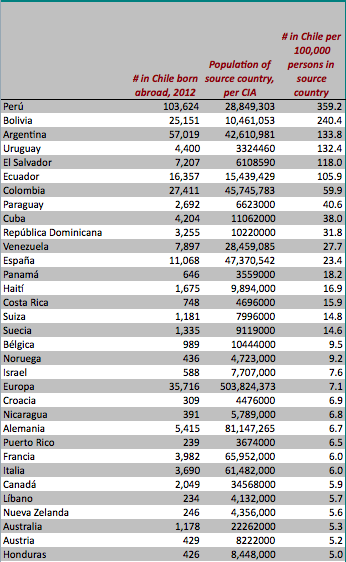