Is there a relationship between these two facts? (Click images for original sources) 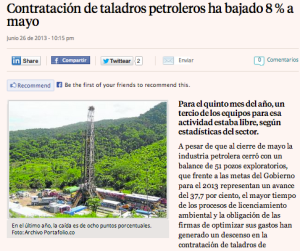 Oil drilling contracting falls 8% in May (year over year)

For the fifth month of the year, a third of the drilling machines were unused, sector statistics show

Despite ending May with 51 exploration wells drilled, which fulfills 37.7 percent of Government goals [of 135] for the year, growing environmental licensing times and the need for companies to optimize their spending has produced a reduction in drill rig contracting, statistics from the Colombian Oil Association (ACP) and Oil Service Chamber of Commerce (Campetrol) show.

…At the end of May, … of 267 rigs registered, which include a range of power ratings, a third are unused while 171 are in use and 6 are in maintenance.

…Campetrol says that among rigs of more than 500 hp, the reduction in contracting is … between 10 and 12 percent… 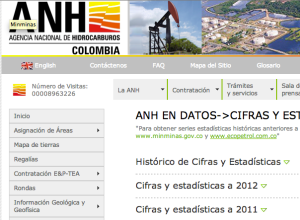 Which is to say, Colombia’s oil regulator, after months of being late on its impressive and useful release of oil-related statistics, has stopped publishing them. They now tell people to get the information from the oil ministry, which also doesn’t publish much of the detailed information. Here’s a link to the last release from ANH. Just a few days ago ANH had posted a menu item for 2013 statistics, but it’s gone.

I guess if the numbers don’t look good, best not to publish the numbers, right? That’s the kind of transparency and good government we all want to see.

Sometime soon, the World Bank-linked ICSID tribunal will announce its awards in the arbitration cases brought by ExxonMobil (XOM) and ConocoPhillips (COP) against Venezuela for 2007 expropriations. What’s six years between friends?

Juan Carlos Boué writes an 84-page (plus notes) publicly available article in English explaining these huge arbitration cases, and why the outcome may not be as favourable (with a u) to XOM and COP as is widely assumed in the USA.

[The XOM and COP decision to leave Venezuela] has been presented as the calamitous culmination of a process whereby, through a mixture of bullying and unilateral measures, the Chávez administration sought to impose extortionate new terms on oil exploration and production activities in Venezuela, which rode roughshod over the vested rights of investors. Chávez’s actions, so this story goes, not only led to suspension of the transfer of managerial know-how and technology from which Venezuela had benefited so handsomely throughout the 1993-2006 period (and without which the gigantic resources of the Orinoco Oil Belt would not have been developed) but, ultimately, paved the way for the involuntary exodus of foreign oil companies from the country and the expropriation without compensation of their assets. That being the case, so this version goes, the aggrieved companies involved were left with no alternative but to initiate legal proceedings against a rogue government and its state oil
company and affiliates.

The picture presented in the paragraph above is drawn in strokes so broad and crude that it reduces the conduct and outcomes of Venezuelan oil policy from 1999 onwards to the level of a mere caricature. Nevertheless, the broadcast and print media have had no qualms about echoing and amplifying it, while a number of OECD governments – most especially, that of the USA – have seemed equally at ease to use it as a premise for taking foreign policy decisions with regard to Venezuela. That such credence should be vouchsafed to unproven allegations raised in the context of acrimonious litigation is hardly unprecedented in the annals of US foreign relations. Unfortunately, as on many a previous occasion, this facile stance contributes nothing towards understanding the real issues underlying, and arising from, a state’s exercise of its sovereign powers to the apparent detriment of the rights (real or alleged) of foreign investors.

If you’re an international law junkie, and I know many of you are, you can read the whole thing here.

I think regular readers know that I can be skeptical about Colombia-oriented oil company Pacific Rubiales and its related companies. But this sounds like some of the more ridiculous bullshit I have ever come across. (Translation mine)

The ex-vice president of Venezuela, José Vicente Rangel, said the Canadian oil company was involved in the acts he denounced at the start of the month, in which “opposition Venezuelans” signed a purchase contract for 18 warplanes.

“Businessmen with problems with Venezuelan justice living in the United States and people linked to the oil company Pacific Rubiales that operates in Colombia” were involved in the May 27 purchase in San Antonio, Texas (USA), he said.

More here, if you’re up for a giggle.

Yesterday, someone using a computer well protected against cookies and snooping dropped in a few times to read my prior posts on Venezuela protecting fugitives from US justice:

Now I wake up to find that Ed Snowden, fugitive from US justice, may be on his way to the Bolivarian Republic. I really hope that his team isn’t hoping that he will receive the same treatment in Venezuela as that received by the nice people at Derwick Associates, who were accused in the press of overcharging the Venezuelan government, and by Guillermo Clamens, accused in the US of having stolen millions of dollars from Citgo. END_OF_DOCUMENT_TOKEN_TO_BE_REPLACED

I’ve been posting less here this year, but I still exist. If you for some reason want to know more of what’s on my mind, you can follow me on the tweeter, listen to my radio work or read articles that have the advantage of having been edited.

Plenty of other projects in the works. Thanks for your patience and continued visits. 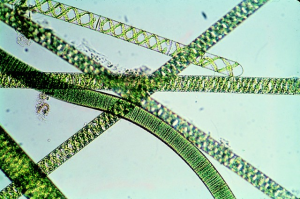 Photo stolen without permission from http://mightymaca.com/page/spirulina/

Fox News has this remarkable expose of the ridiculous scam organization IIMSAM. It’s intellectually honest about the possible connections to US President Obama, which is saying something for a Fox News story. It also shows that this bizarre group issues travel documents that are fishy at best.

The writer left out one really odd tidbit that wouldn’t interest a general audience, but is sure to fascinate those of us following Latin America oil scams. As SG pointed out in comments in April, Miguel Lausell is an IIMSAM goodwill ambassador. Lausell, you might recall, was once a representative of the oil scam called Arevenca. He is one of the defendants being sued by Betterroads Asphalt in Puerto Rico for non-delivery of almost $8 million worth of petroleum products.

This link is also about Lausell and IIMSAM.

Early 2010: Investors in Petrobras (PBR) hear about the Brazilian government’s plan to issue more stock for the state-controlled oil company and buy most of it.

June 2013, we can see how much stronger and more powerful the company became once shareholders realized that the government would look out for itself, rather than minority holders: 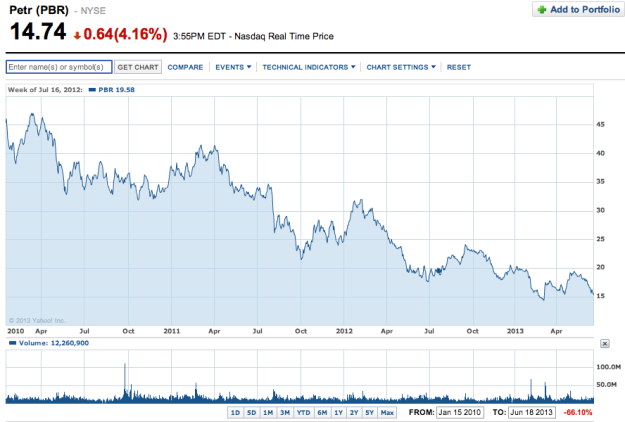 What’s a little 8-year low between friends? And yes, that volume spike there? That was Sept 24, 2010. The stock barely moved that day. That is the picture of “smart money” leaving.

From what I can tell on this here table, Brazilian rubes are included among “other entities.” They have 2.44 billion shares, 18.7 percent of the company, while all other global investors hold 34 percent. The balance is held by various government agencies. Since Brazil’s stock-owning classes make up a tiny part of the world’s investors, those Brazilians have taken a uniquely serious hit on this price decline. How much of a hit? On the decline from, say, $40 a share to $15, you’re talking $25 a share, or $61 billion in lost wealth for Brazilians just on Petrobras’s share decline. Much of that is probably coming out of pension funds for regular people.

So much for “richer, more powerful and stronger.”

PS: I should be clear that I’m no expert on Petrobras, and I know I’m being very simplistic by assigning the stock drop to that one move by the government, without looking at the general shift out of emerging markets, the regulatory problems for the presalt, and probably many more elements I would know about if I spent more time paying attention to Wall Street. Regardless, I think the volume spike alone shows that Lula’s words mattered.

Brazil? That’s not where you expect to see mass demonstrations. On my first trip to Brazil, in 1992, I tried to talk with people about politics. Nobody wanted to. Finally a drunk on a street explained why: He said he had been a political activist and had gotten beaten for it too many times. He said people are scared to talk politics, you have to be insane to talk politics in public. Like him.

At the time, the progressive young people I met would whisper that they supported Lula, a union activist with a political movement. Over a decade later, that same guy finally won the presidency. He was widely credited for his hybrid socialism-capitalism that helped use some of Brazil’s booming sales of hydrocarbons, iron ore and grain to make the country more equal and pull millions of poor people up into the middle class.

Today, the generation coming up has higher expectations. They don’t just want a few rusty handouts while the billionaires remain in control, zipping about in sports cars, running over  poor cyclists. They want a country that works.

Here are a couple English-language stories I have found informative: END_OF_DOCUMENT_TOKEN_TO_BE_REPLACED 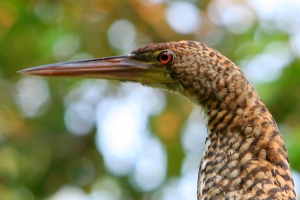 May 31, Petroecuador spilled 11,480 barrels of crude, much of it going into a tributary of the Amazon River. The company is now sampling waters from miles downstream, in the Napo and Amazon rivers. It’s likely they were affected.

I know it’s a separate issue, but I think about the tens of millions of dollars that both sides have spent on the Chevron-Ecuador lawsuit. I think about how spending a fraction of that on spill prevention and response in Ecuador would have made this spill less likely and then, if it happened, less destructive. But that’s not how this world works.

Party on Wayne. Fight on, Chevron and Rio Agrio plaintiffs.

Bloomberg News has a magazine article out today about Pacific Rubiales Energy Corp. The story includes some proper on-the-ground reporting beyond official sources, which we don’t often see when it comes to the company known as PREC. Some of the article’s bullet points in bold, with my commentary in plain text. END_OF_DOCUMENT_TOKEN_TO_BE_REPLACED

Setty's notebook
Create a free website or blog at WordPress.com.