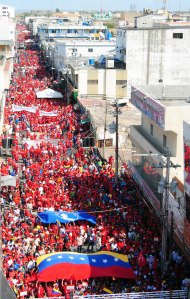 As Reuters ably showed yesterday, Venezuela’s wave of demonstrations and crackdowns are unlikely to affect the oil industry “in the short term.” The article left out the long term, but it’s pretty clear that it these rallies and counter-rallies can’t help the industry get out of its long-term slump. Every day that goes by like workers marching instead of, you know, working, and every time the oil minister has to spend hours either speaking about politics or attending cabinet meetings is another day of delay for PDVSA’s big capital projects: building new cities, ports, water systems and pipelines in the Orinoco belt, arranging financing with private partners, that sort of thing.

For those of us worried about global climate change, these delays are a good thing — they keep some of the world’s dirtiest crude in the ground, raising fuel prices and encouraging a transition to clean energy.

For those of us worried about the well-being of the Venezuelan people, the news isn’t so happy. Remember this chart, showing in schematic form how the government’s oil output goals have grown more ambitious over the years. When I wrote that, four months ago, Venezuela was aiming for roughly a 3 million barrel-a-day increase over the following five years. Of course output changes in big increments, but that works out to about 2,000 barrels a day of new production in order to overcome decline and also boost output. Every single day that workers are out enjoying the sunshine means those 2,000 barrels need to be spread out among the remaining days.

And what is PDVSA brass thinking about these days? I know there’s always a gap between public relations and reality, but here are the latest press releases via e-mail (a bit wider selection than what you can get from the company’s increasingly dysfunctional web site): 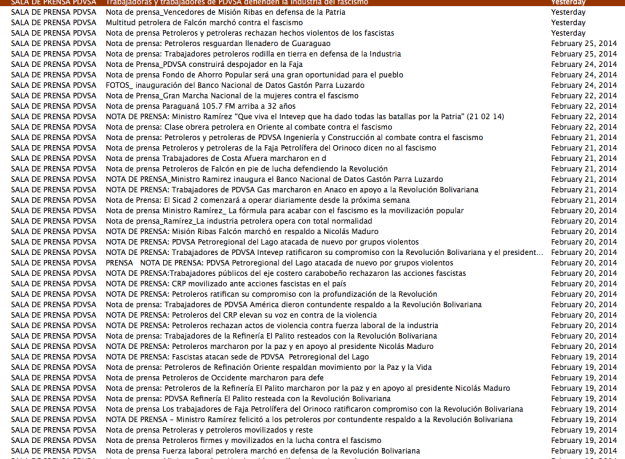 Since Feb. 16, the company has sent 53 press releases, of which one was specifically about oil operations (PDVSA to construct blending plant in Orinoco Belt), and one more about PDVSA bonds. In other words, the real cause of these protests — that Venezuela is falling into an economic shithole — has no near-term exit.

So to cheer you up, here are a few more of the photos PDVSA has sent out:

UPDATE: I just want to point out that this post is an example of the kind of lazy reporting I like to complain about. What happens on the internet (or in this case e-mail) doesn’t actually matter. What matters happens in the hands and heads of the Venezuelan people. And I’m not there, so I can’t report much on that, so I write what I know, which isn’t much. For better info, find people on the ground, especially people whose politics you disagree with, follow their tweeters, read what they are seeing and saying.

I’m not blogging much these days, what with real life giving me plenty to work on, but I thought it only fair to give Crowdflower credit for eliminating the reputation management tasks designed to help the Bolibourgeoisie that I described here. Glad that’s done, though it took way too long. Onward…