Argus is reporting that PDVSA is entertaining offers of $10 billion to $15 billion for Citgo Petroleum Corp. and is marketing its stake in the Chalmette refinery in Louisiana:

Venezuelan state-owned PdV has retained Deutsche Bank to find a buyer for its 50pc stake in the 184,000 b/d Chalmette refinery in Louisiana, a US-based PdV official told Argus… The energy ministry in Caracas confirmed today that Deutsche Bank is leading the search to find a buyer for PdV’s interest in the Chalmette refinery “as soon as possible.” …

Venezuelan officials told Argus yesterday that PdV is weighing offers in the range of $10bn-$15bn to buy its downstream subsidiary Citgo. The planned sale of Citgo is aimed at raising cash for upstream projects at home, redirecting more crude supply to China in exchange for oil-backed loans, and reducing the government´s potential exposure to international litigation.…

I don’t know if this will all be feasible from a legal standpoint, as the sale of assets that are subject to attachment in an arbitration claim could be frozen by the courts so that a potential winner can grab the assets. But assuming there’s a way to sell this stuff, does it make financial sense for PDVSA to do it? END_OF_DOCUMENT_TOKEN_TO_BE_REPLACED

(Updated to include New York indictment)

Last Wednesday, Aruba arrested Venezuelan general, former counterintelligence chief, Chávez coup participant, and man-about-town (in which “town” is the Venezuelan-Colombian border) on a US warrant for alleged drug smuggling. The Florida indictment is here and (UPDATE) here is the New York indictment. They are worth reading for its own sake, if you’re into that kind of thing. He was then freed after Venezuela raised a stink over diplomatic immunity, as Carvajal had entered Aruba to become consul in the island nation.

The affair leaves a heap of questions unanswered. Why did Venezuela name Carvajal to the post and then send him to the island, especially given Dutch opposition?

Did the US for some complicated reason support freeing Carvajal?

Was this all theatre, with something else entirely happening behind the scenes?

Is Carvajal now an informant? Was he before? El Nacional indicated that, and I also heard this rumor elsewhere.

Did he really travel to Aruba on N9GY, which belongs (indirectly) to Roberto Enrique Rincón and Jose Roberto Rincón of The Woodlands, Texas? (Columnist Nelson Bocaranda says he confirmed that fact, but I’ve been unable to do so. The Rincóns’ lawyer hasn’t responded to my e-mail asking detailed questions.) If so, what is the Rincóns’ connection to this guy? Did they really sell him out to save their skin, as one gossip rag claimed?

There are more questions, but those are enough for now. Since I am mostly interested in natural resources and not in Venezuelan politics per se, you might go check these other sites for more coverage: Here’s Daniel and Kepler and Raul. Also for some reason the Wall Street Journal has been pretty dominant in the English-language reporting on this. If you want to get around their paywall, for a few days anyway, find the stories you want, google them, and then click through from Google for free access. Like this one, which is temporarily free from here.

That Florida indictment again, and the New York one. Interesting.

Arevenca, the fake oil company long followed around these parts, has offered to buy Cyprus Airways.

(You don’t understand that? Don’t worry, it’s all Greek to me, too.)

That’s just a tease, as much is happening in Arevencaland. More soon.

PetroPerú tries its hand at environmental devastation. Environmental Health News writes it up in English:

On the last day of June, Roger Mangía Vega watched an oil slick and a mass of dead fish float past this tiny Kukama Indian community and into the Marañón River, a major tributary of the Amazon.

Community leaders called the emergency number for Petroperu, the state-run operator of the 845-kilometer pipeline that pumps crude oil from the Amazon over the Andes Mountains to a port on Peru’s northern coast.

By late afternoon, Mangía and a handful of his neighbors – contracted by the company and wearing only ordinary clothing – were up to their necks in oily water, searching for a leak in the pipe. Villagers, who depend on fish for subsistence and income, estimated that they had seen between two and seven tons of dead fish floating in lagoons and littering the landscape.

“It was the most horrible thing I’ve seen in my life – the amount of oil, the huge number of dead fish and my Kukama brothers working without the necessary protection,” said Ander Ordóñez Mozombite, an environmental monitor for an indigenous community group called Acodecospat who visited the site a few days later.

Read it all here.

And on July 2, PetroEcuador had a freakishly similar situation. Amazon Watch offers the details: END_OF_DOCUMENT_TOKEN_TO_BE_REPLACED

I have learned that the billion-dollar contract referred to in this report was not just for ship rental. It was also for the provision of ship crews, divers, and geotechnical engineers, and other professionals for the full project of pipeline mapping, repair and replacement.

AND AN UPDATE: Pdvsa said in its 2014 annual report that it paid this award.

PDVSA, Venezuela’s state oil company, released financial statements last month. One of the more remarkable items in there was a $644 million loss for an arbitration award in a case that I had never heard about before — and no Venezuela expert I’ve talked to had heard about, either. This is all that PDVSA has ever disclosed about the case:

In November 2013, the award related to the arbitration request filed by Gulmar Offshore Middle East LLC and Kaplan Industry Inc. was issued against PDVSA, corresponding to early unilateral termination of contract by PDVSA. The award established a compensation of $644 million.

That is a tremendous amount of money. I wrote last week in REDD Intelligence (subscription needed to read) about what this surprise means for Venezuela’s country risk. Here, I’m going to focus instead on what we know about the companies that won this money.

I had only heard of Gulmar Offshore as one of a long list of companies with assets that Venezuela expropriated back in 2009. I had never heard of Kaplan, as it was misspelled in the initial announcement (good English analysis here) as “Kapplan.”

Gulmar was, and is, a company that leases vessels for undersea projects in the oil industry. It was later purchased by Oaktree Capital Management (more on them later). Back in 2009, I had a hard time reaching them; for this article the one phone number I found didn’t even ring and Oaktree’s lawyer didn’t respond to an e-mailed request for comment.

Kaplan is more difficult to pin down. Bloomberg said that Kaplan was a gas-cylinder manufacturer from New Jersey. Oops! That’s Kaplan Industries. 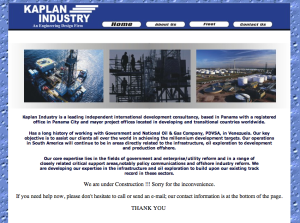 No, this was Kaplan Industry. At the top of its web page, it says it’s “An engineering design firm.” Then in the text, it’s “a leading independent international development consultancy.” The confusion may have come about as the website was thrown together, almost entirely plagiarized from other sites. The home page is from Adam Smith International, some of the “About” page is from Secunda Canada, and the line “Having fun inspires creativity, which rouses fresh ideas that we take to our clients” is from Zain Public Relations. Yes, having fun inspires creativity. And nothing demonstrates creativity like “copy-paste.”

No one answered at any of the three phone numbers listed on the website. Company president Vince Hulan didn’t respond to e-mails sent to the address on the website, including one e-mail asking specific questions about the plagiarism and other concerns raised in this article. Four lawyers connected to the company and its principals also failed to return calls and e-mails.

END_OF_DOCUMENT_TOKEN_TO_BE_REPLACED 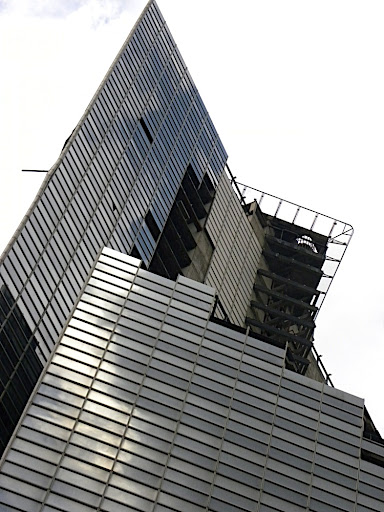