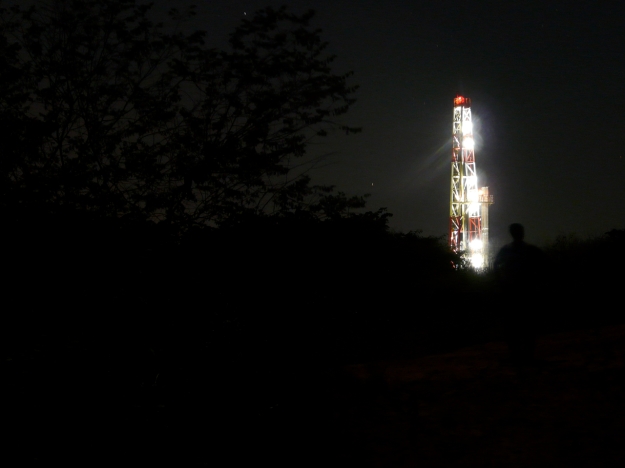 10-second exposure of me and a drilling rig. This is how some of us spend our vacations.

There are rig owners that have declined to discuss with PDVSA the rates for services and have preferred to keep their equipment locked up for a year in Anaco, in Anzoategui state. This is the case specifically of the company Helmerich & Payne, a U.S. transnational firm. That’s why an eminent domain declaration over them is being requested at the National Assembly, to thus assume control. We won’t allow them to sabotage our operations as they did at the end of 2002.

Our dispute with PDVSA has never been very complicated and our position has remained clear: We simply wanted to be paid for work already performed. We stated repeatedly we wanted to return to work, just not for free. We are surprised by yesterday’s announcement only because we have been in ongoing efforts in a good faith attempt to accommodate a win-win resolution, including a willingness to sell rigs. We have worked in Venezuela for 52 years and wanted to continue under reasonable conditions. At the same time, Helmerich & Payne has reduced its number of rigs in Venezuela in half since 1998. At that point, almost 30% of our land rigs were in that country, as compared to under 5% of our land rigs today.

Am I the only one to see these comments as more similar than different? END_OF_DOCUMENT_TOKEN_TO_BE_REPLACED

Planta Centro, the biggest fossil-fueled power plant in South America, didn’t produce any electricity on Tuesday, according to a daily report (Link only good for 3 months) from the grid administrator. The cause was something called a “hot point,” according to El Universal (hat tip to the excellent Venezuela energy newsletter Petrofinanzas).

Plants come up, plants go down, and this plant was never able to fulfill anything like its nameplate capacity, so it’s not the worst thing in the world if it’s out of commission for a spell. But it’s depressing to note that on the bicentennial, April 19, the government touted so loudly that Planta Centro had been fixed. There were fireworks. 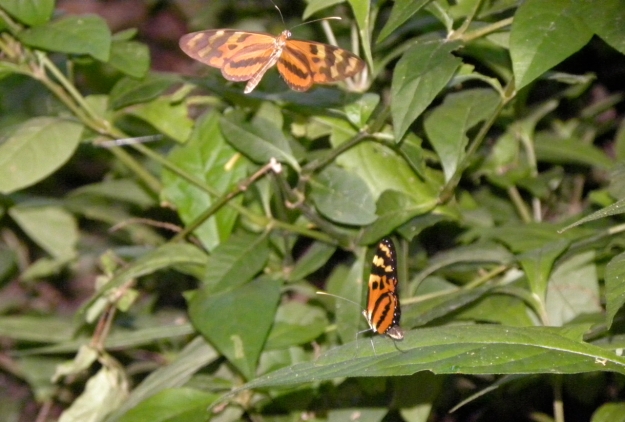 I am still out of commission while giving away, selling or throwing out most of my possessions and finding a way of getting the remains (which amounts to, more or less, an elementary school report card and my map collection) across several South American borders, away from the silverfish that have already devoured much of my Ontario health insurance card and the rules to a sci-fi-shoot-em-up game I have no memory of inventing at age 12. Thank you very much for your patience and thanks for continuing to visit.

As a special thank-you, an update on the most controversial topic ever covered on this website (as measured by number of comments, anyway): butterflies.
END_OF_DOCUMENT_TOKEN_TO_BE_REPLACED

It’s been a couple weeks since the Venezuelan government eliminated electricity rationing, but there is no change in the country’s daily electricity consumption. I said at the time that rationing didn’t do anything to reduce energy consumption, and I stick with it. That said, you can see from here that there was one conservation measure that worked. 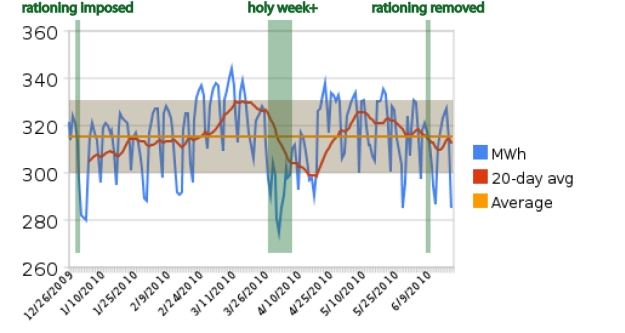 The chart shows daily electricity consumption from the Centro Nacional de Gestion, which runs the power grid. The yellow line with a brownish shaded area is the overall average for the period and one standard deviation. I think the conclusions are pretty clear — you want to save energy, send everyone home from work.

You can see that people didn’t just take one week off, either, but two. It will be interesting to see if this cuts second-quarter GDP.

We interrupt our regularly scheduled proceedings for a bit of off-line life. I’m moving, so the next two weeks is going to be spotty at best. Since you’re probably here for Venezuela news, I recommend that you keep up on it like an expert. Just follow:

See you in a while…

Will PDVSA take over Valero’s Aruba refinery? It would fit PDVSA’s strategies of buying refineries cheap, moving away from dependence on the U.S. market, and producing more value-added products. However it’s hard to believe they’d be allowed in given the maintenance and environmental record at Isla on Cuaracao, and it would be hard to pay for the refinery unless Valero wanted to just give it up very cheap. Anyway pretty interesting that the papers are making it sound like a done deal.

Every day, this website attracts readers from an impressive chunk of the world’s biggest oil, engineering and consumer products companies, along with various government agencies and universities. This post is addressed to those of you who work in these multi-billion-dollar institutions and are wondering how you can harness the power of Setty.

You’ll be pleased to know that I can apply my wonky records skills, my contacts and my dogged on-the-ground reporting ability to your due diligence investigations and risk analysis efforts.

Write me for more information. And don’t worry. I have a real name and CV and am happy to share them.

Lettuce sure has gotten spendy.

You may have heard that Venezuela moved this year from having two exchange rates to at least four. That is, it used to have the official exchange rate pegged to the U.S. dollar and a weaker free-market rate. The official rate has for the past couple years been reserved for people importing items deemed crucial by an agency called Cadivi. (These whiz kids have routinely allowed the cheap import of designer clothes and putrid food while delaying currency trades for companies buying necessary parts for the oil industry.)

The free-market rate was set, in theory, through trading of Venezuelan international bonds in bolivars. People bought in bolivars, and sold in dollars, so if it took 4 Bs in Caracas to buy a bond that sold in New York for $1, it gave an “implicit” rate of 4 Bs to the $. While it’s illegal to publish any exchange rate other than the official one, the swap rate was frequently published by traders via postings to Twitter and anonymous blogs. Those reports, in turn, not only gave some transparency to legal buyers and sellers of bonds, but also gave a benchmark price for people in the illegal black market. That is, tourists with $500 cash who needed some bolivars for their Gran Sabana vacation could refer to the blogs to ensure the bolivar-selling huckster at the airport was treating them fairly. 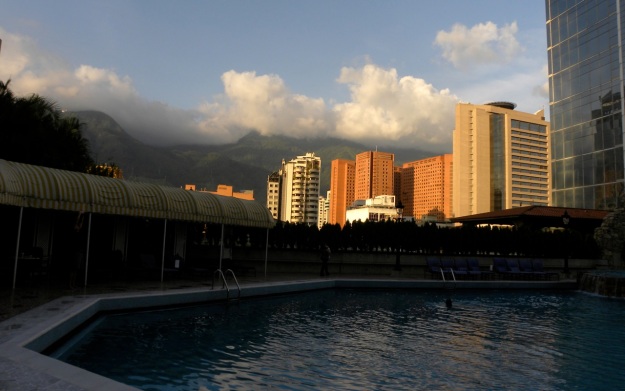 Everybody out of the pool! Hotel Meliá, Caracas, charges 300 bolivars for a day pass at the pool, gym and sauna -- $69.76 at the official exchange rate, $33.70 at the lettuce rate, and about a week's income for a minimum-wage Venezuelan. Mostly just a pretty picture to break up a wonky-ass post.

The government banned the swap system a few weeks ago. The well known blogs closed and were replaced by newcomers of unknown reputation and methodology. The scammers got the upper hand. With no official channels for most currency trades, all that’s left is the black market. But now there’s no benchmark for the deals. An acquaintance who organizes black market transactions says nobody is trading via money transfers under fear of arrest. On the street, near the Central Bank, a stranger offered another friend cash U.S. dollars for 12 bolivars apiece. At the airport this week a stranger offered to buy my dollars for 7 bolivars apiece.
END_OF_DOCUMENT_TOKEN_TO_BE_REPLACED

PDVSA says they won a round in the jurisdiction hearing at ICSID arbitration panel where Exxon is suing for billions of dollars over an expropriation. So far it doesn’t mean much, but in case you’re obsessed, here’s Reuters’ take. The real case has yet to be heard, and the decision remains at least a year off. It’s Friday, go watch the World Cup reruns.

Setty's notebook
Create a free website or blog at WordPress.com.