After several years of US-Venezuelan relations being mostly a non-issue, they have suddenly blown up thanks to the US’s use of inflammatory rhetoric in the “whereas” portion of an executive order sanctioning seven midlevel officials.

When you have thousands of nuclear missiles, spy personnel and tech in every country on the planet, a military budget almost as big as the rest of the world’s combined, and an economy apparently invulnerable to external shocks, you have to be deluded to consider a midsized, lowish-income South American country full of baseball-playing, TV-loving, fried-food-eating beach-goers to be an “unusual and extraordinary threat.” It’s like the Dallas Cowboys worrying that their defensive line may be breached by a middle-school field hockey team. A country that does in fact face imminent threats of climate change (which can’t be named), destructive levels of poverty, and gun violence (which also can’t be named) is instead going to focus its state power on…seven midlevel officials in Venezuela. I’m sure everyone in Peoria is sighing with relief, their fears are gone. I hope there is a new military honor for the valiant battle against midlevel bureaucrats in South America.

But seriously. There is more to this move than meets the (sarcastic) eye.

First of all, I don’t like the idea of sanctions on individuals. As far as I’m concerned, they are themselves a human rights violation. If you have information that could justify charging someone with a crime in your country, lay charges and try and get the person into custody. If you don’t have enough info to lay charges — or more likely, if you don’t want to reveal your sources and methods to scrutiny — then STFU. You can’t just impose state power on people without due process, citizens or not. The idea of human rights is we have them because we are born, not because we are born under one legal regime or another.

END_OF_DOCUMENT_TOKEN_TO_BE_REPLACED

Here is a very nice wrap-up of the state of the debate over climate change in US Congress.

As this guy notes, the big climate marches Sunday were only needed because people are wilfully ignorant. I just went through my old papers and I turned up a copy of the newsletter No Sweat News from fall 1993. Here are pages 14-17, scanned for your pleasure. 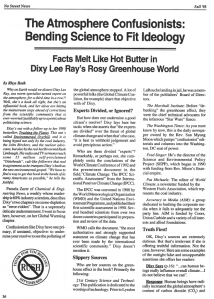 Yes, 1993. It is, here in the northern hemisphere, now fall 2014. This newsletter is now old enough to drink legally in the Puritan States of America. And it is still on point. The debate has barely moved.

That despite the cover article of the Summer 1995 issue, “Climate Change, Insects and Plague,” which explains why insects are among the quickest adaptors to climate change, happily moving upslope or up-latitude as conditions permit. Even 19 years ago, they were noting that malaria-bearing mosquitos had increased their range in response to climate change. And now here we are, in the middle of a host of outbreaks, from Ebola to Chikungunya to measles to mysterious weirdness, and people for the most part know not to mention climate change because it’s just going to break down into a stupid screamfest when we all need to just get together and fix these symptoms asap.

This blog is about scandals in the energy industry. The biggest scandal of all has nothing to do with Spanish con men or Nigerian governors or Venezuelan get-rich-quick schemes. The biggest and worst scam out there is that we continue to burn so many fossil fuels. We are all suckers in a huge con by the energy industry. Man-made climate change is now well underway, matching the form but exceeding the scale of predictions from 20 years ago, and we, like the victims of any con, continue to deny that we’ve been had, believing the con man’s promise that the payment will come next week, that it wasn’t his fault. Like the victims of any con, we blame ourselves. Like most victims, we refuse to react with righteous rage, instead slinking back home to have a drink and lament our fate. It’s a bad way to go.