A good way to monitor Latin American currencies is against the Canadian dollar, rather than the US dollar. The USD, as world reserve currency, is mostly a measure of risk tolerance around the world. People fearing instability (still and despite it all) buy greenbacks. But the CAD, as the currency of a stable, developed, but resource-dependent country, is a nice comparison point for the Latin American currencies, as it cuts out a lot of the USD’s noise.

Against the CAD, the Colombian peso long tracked other currencies in the region, particularly the Peruvian nuevo sol and the Chilean peso.

This first chart shows currencies against the CAD from 1 Jan 2010 to 1 Oct 2014. The Colombian peso (COP) is the red dotted line, green is Peru, navy blue is the Mexican peso, and fucsia is Chile. Up top, you see the Brazilian real and the Argentine peso doing their wacky and devaluatory deeds in red (solid line) and purple.

Here’s what the same currencies have looked like over the past calendar year:

This time, Argentina is down there with Peru and Chile, actually appreciating against the Canadian dollar. Mexico is drifting weaker, and Colombia is suddenly tracking Brazil in a big, painful devaluation. The are both big oil producers whose state-controlled companies were once stock market darlings. They are both economies that were overhyped circa 2011, and are now probably in an excessive backlash.

Here’s the 5-year chart. Colombia has detached from its usual peers and is devaluing mightily.

The upshot for me, as a consumer of Colombian Harina P.A.N. precooked corn flour in Canada, is that a kilogram of this white powder has dropped from CAD 4 to CAD 3.3 over the past year.

Given what we already saw in 2014, I suspect Colombia will get a competitive advantage in the production of other white powders. Next year’s coca production reports will likely show Colombian output surging.

Marcelo Odebrecht, head of Brazil’s biggest engineering and construction company, is in jail in Brazil on allegations of kickbacks in the procurement of oil industry materials to Petrobras. Without prejudging his guilt or innocence, I think it’s fair to say he isn’t doing himself any favours with e-mails like this:

Brazilian police said on Wednesday they intercepted a note from the jailed chief executive of Odebrecht SA to his lawyers asking to “destroy email,” after he became the highest-profile executive arrested in Brazil’s largest ever corruption investigation.

Marcelo Odebrecht, head of Brazil’s largest engineering and construction conglomerate, was arrested Friday in a sweeping investigation into a kickback scheme at the state-run oil company Petrobras. [ID:nL1N0Z50JB]

Dora Cavalcanti, a lawyer for Odebrecht, called the publication of the note “an act of extreme bad faith by the police,” and said there was nothing criminal about its contents or Odebrecht’s intent.

“That phrase ‘destroy email’ meant ‘explain’ or ‘refute’ the allegations about the email,” Cavalcanti told Reuters, adding that it was one of seven points in Odebrecht’s notes for his plea for habeas corpus, or release from unlawful imprisonment.

Yes, clearly, he was only saying that the e-mail needed to be destroyed metaphorically. I’m all for metaphoric destruction. When you growl “I will destroy you” of course you don’t mean that you will put someone in a meat grinder. Rather, you mean you will harm the person’s reputation. Something Mr. Odebrecht is learning all about, now that I think of it.

Joking aside, the question is, does Odebrecht have operations in other oil-producing countries? With an ostensibly weak compliance regime in Brazil, might there be something to investigate in other countries? Happily, the answer is no. Because Odebrecht operates only in strictly controlled, low-corruption jurisdictions:

Odebrecht Oil & Gas offers integrated solutions for the upstream oil and gas industry in Brazil, and selectively, in Angola, Venezuela, Argentina and Mexico, both during the investment as well as the operations phase.

Oh good, nothing to worry about.

Update a few minutes later: I see the NY Times does Angola today:

Corruption Is Killing Children in Angola

This is a video report that I’ll never be able to do again. It’s about Angola, an oil-rich and fabulously corrupt country that also happens to be thedeadliest place in the world to be a child.

Angola, naturally, doesn’t welcome journalists. It took me about five years to get a journalist visa to get into Angola, and after my reporting I doubt I’ll get another visa as long as the current regime remains in power. So at The Times, we poured a lot of time and effort into the story of what corruption does to a country.

For me, the most compelling moments are those of rural Angola, the villages where people live without any access to doctors or dentists. We simply drove down a highway for hours, and then twice took small dirt roads quite randomly to see where they would lead, and then stopped in villages and chatted with people. It’s pretty heartbreaking to see kids suffering untreated from disease and unable to attend school, or to meet a mom who has lost 10 children — and it’s not just sad, but infuriating when you see it in a country that is rich with oil and diamonds. Then you remember that the Angolan president’s daughter is a billionaire, that Western governments are buddying up to the president — and, well, you feel you owe it to the villagers you met to tell their story in their own words. So we shot some videos to run with my columns. May this add pressure on the government to spend its oil wealth not just on Porsches and Champagne for the leaders, but also on health and education for ordinary Angolans.

Go watch Kristof’s video if you can stand it. And don’t worry about Odebrecht because I’m sure they had nothing to do with any of this.

In Venezuela, they insisted they were a construction company. Now, they just “intervene” in infrastructure projects, whatever that means. (My slightly edited Google translation below).

With the installation of the first “Cajeme 10M Solar” panel farm in Ciudad Obregón, Mayor Rogelio Diaz Brown Ramsburgh placed the Municipality at the forefront of renewable energy policies nationwide.

That is by establishing a project in which a municipality and a drinking water agency are supplied by solar, starting one of the most momentous development schemes for the region.

“This farm will produce about 70 percent of the energy consumed by the Municipal Government, whether in public lighting, buildings, courts, public spaces, among others,” he said during his speech.

For two years he sought to attract this photovoltaic generation park…

Like other success stories of this administration, with this project, established molds are broken in the quest to become a self-sustaining municipality, he said.

In addition to saving 20 percent in energy expenditure by City Hall, he said, clean energy will be produced for a period of 20 years at a cost below that of the Federal Electricity Commission.

To realize this plan, he stressed, the investment of 25 million dollars from the company Zigor Mexico and Latam, and the intervention of the Derwick company have been necessary.

Yeah, Otto, it’s a coincidence. Colombia is importing more from lots of countries, not just the USA. 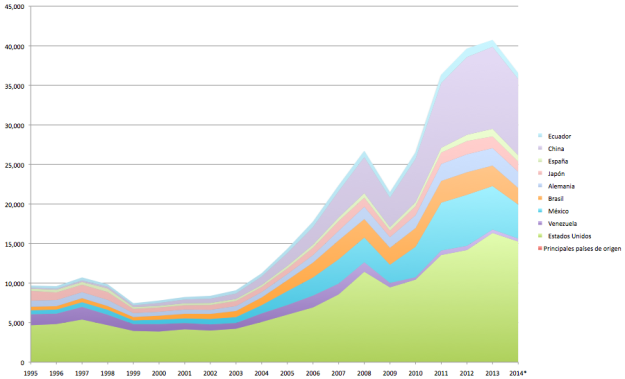 All figures from here. 2014 numbers are just through October, so that decrease is likely to disappear in final figures. As you can see, the big winners since 2010 have been Mexico (free trade agreement since 1995) and China (no free trade agreement), much more than the USA.

Commodity price trends and changes in Colombian access to consumer credit (for Chinese knickknacks) are probably bigger factors in this chart than trade agreements.

You could go to Harvard and take classes from Francisco Monaldi. You could hire Eurasia Group’s Daniel Kerner for big bucks. And you could wait months for a meeting with Chevron’s Ali Moshiri. Or you can go to YouTube and watch them speak with remarkable candor about the big picture of oil and gas in Argentina and Venezuela. For free, while you brush your teeth.

As usual, humans are failing. This master class by three of the top names in the industry has, count ’em, 206 views.

Here are a few notes. I took more, but they’re for me. You need to go watch this one for yourself. END_OF_DOCUMENT_TOKEN_TO_BE_REPLACED

This is fascinating. What if governments around the world took this tack, suing the companies that bribed their officials? Could be a great way to get back some of their losses.

Petroleos Mexicanos, Mexico’s state- owned oil company, filed a $1.5 billion lawsuit against Siemens AG (SIE) and South Korea-based SK Engineering & Construction Co., claiming the companies bribed Pemex officials to win and keep refinery construction projects.
Siemens, which in 2008 paid $1.6 billion to settle a bribery investigation by the U.S. Securities and Exchange Commission, conspired with SK Engineering and a joint venture partner to bribe Pemex officials while bidding on a refinery modernization project in Mexico’s Cadereyta region, the oil company alleged in a complaint filed yesterday in Manhattan federal court.
The contract was awarded to the joint venture in 1997, according to the complaint. The defendants later bribed Pemex officials to keep the contract, when the project was plagued by cost overruns and disputes over the work, according to Pemex.
“Plaintiffs suffered millions of dollars of harm from the selection of an inadequate contractor, the acceptance of harmful contractual terms, and the acceptance of significant cost overruns,” Pemex said in the complaint.

Noel Maurer has a couple interesting posts about the rise in fuel thefts by Mexican Organized Crime Organizations, or MOCOs. First, he gives some numbers. Then he explains the logistics, as laid out in a US lawsuit.

The Zetas intercept the oil in one of three ways. The major one is to simply tap into the transfer and delivery systems. (To do this, the Zetas needed to build their own pipelines, a pretty impressive accomplishment.) The secondary one is to hold-up the tanker trucks on their way to Reynosa. The final one is to kidnap Pemex officials and force them to divert condensate.

Now, the Zetas can easily fence refined products inside Mexico, but they can’t sell condensate: Pemex operates the only refineries! So they have to move it to the U.S. According to the lawsuit, the stolen condensate was moved by tanker truck (think about that for a moment) to the border. Before crossing, however, the Zetas transferred the stuff to newer trucks that meet U.S. regulations. The drivers then presented forged export documents, sometimes mischaracterizing the condensate as naphtha. They would then sell the stuff to the U.S. defendants.

In other words, according to Pemex, Big Star, Superior Crude and F&M “actively and knowingly participated in a conspiracy to import and market the stolen condensate in the United States.”

Interesting stuff for those of you who are interested in the antics of the many actors who are drawn to Latin America’s oil wealth like flies to shit. Go take a read.