The new road climbing out of the Amazon into the Andes

Chinese premier Li Keqiang is to push controversial plans for a railway through the Amazon rainforest during a visit to South America next week, despite concerns about the possible impact on the environment and on indigenous tribes.

Currently just a line on a map, the proposed 5,300km route in Brazil and Peru would reduce the transport costs for oil, iron ore, soya beans and other commodities, but cut through some of the world’s most biodiverse forest.

The six-year plan is the latest in a series of ambitious Chinese infrastructure projects in Latin America, which also include a canal through Nicaragua and a railway across Colombia. The trans-Amazonian railway has high-level backing. Last year, President Xi Jinping signed a memorandum on the project with his counterparts in Brazil and Peru. Next week, during his four-nation tour of the region starting on Sunday, Li will, according to state-run Chinese media, suggest a feasibility study.

The criticisms are similar to those that met the Interoceanic Highway project along the same general route a decade ago. When I traveled that road in 2011, when it was mostly paved but still missing a couple final links, I found that the most of the predictions of doom had failed to come true, while there were some clear benefits from the road construction. However, the bad news may have been bubbling away, and I haven’t been back to see if things stayed so positive once the road was fully open.

Time to go back!

Yeah, Otto, it’s a coincidence. Colombia is importing more from lots of countries, not just the USA.

All figures from here. 2014 numbers are just through October, so that decrease is likely to disappear in final figures. As you can see, the big winners since 2010 have been Mexico (free trade agreement since 1995) and China (no free trade agreement), much more than the USA.

Commodity price trends and changes in Colombian access to consumer credit (for Chinese knickknacks) are probably bigger factors in this chart than trade agreements.

A tweet by the Devil alerted me to this remarkable WSJ story.

It says Goldman Sachs, via an entity called “Oak Finance Luxembourg SA,” loaned $835 million to Banco Espírito Santo just weeks before the Portuguese bank collapsed. That is remarkable because Goldman also owned more than 2% of the bank.

The loan was meant to cover a risky loan that Espíritu Santo had made to Wison Engineering of China and Venezuelan state energy company Petróleos de Venezuela SA, as they upgraded the Puerto la Cruz refinery.

When Espíritu Santo collapsed, Portuguese authorities broke it up into a good bank and a bad bank. The bad bank kept the bad name and the bad assets. Goldman’s loan had gone over to the good bank, where it could have been repaid in full. But

END_OF_DOCUMENT_TOKEN_TO_BE_REPLACED 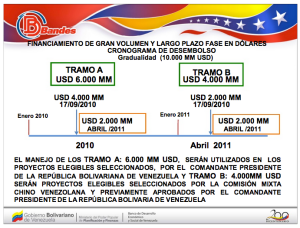 UPDATE: I learn that The Devil’s Excrement and Armas del Coronel blogs had these documents years ago. I missed them at the time. Credit where due!

Oil geeks and Venezuela-watchers might remember that in early 2010, a delegation of Venezuelans went to China to request a $40 billion loan and came back with a new $4 billion loan. This was the first part of the ongoing lending by China of money to Venezuela to be repaid in crude oil and fuel oil. That in turn led to new agreements in 2011. These deals have gotten a lot of attention, but much of what has been said has been poorly backed by information about the real content of the Venezuela-China deals.

Turns out, a collection of financial documents about these deals has been online since late 2011. Here you go, yours at no extra charge. Most of them appear to be late-phase drafts, rather than signed documents. But they are certainly close enough to final that they can give people discussing these deals a bit of grounding in reality, rather than the just making stuff up.

Included in this collection:

A trip report for President Chávez, describing exactly what happened in Beijing on the trip from February 2 to 4, 2010.  END_OF_DOCUMENT_TOKEN_TO_BE_REPLACED

It looks like some lousy record-keeping. But even if these last two tables have to be added together, 2014 is turning out to be the biggest year for PDVSA lobbying since at least 1998. Not likely to exceed Statoil’s 2007 record, but still, pretty healthy spending.

I guess those possible sanctions on alleged human rights violators were going to pose some sort of threat to Citgo.

Of course, none of these state oil companies can compete with ExxonMobil:

I recognise Francisco Javier González and Glenbert Croes. Who else is in this picture? Any information will be helpful.

UPDATING: Thanks to Otto, the Devil, Boz, and my sister for pointing out the name tags on the table and/or the names in the video. The problem is that Abraham Reek and Martino Schiera, for example, have so little Internet paper trail that I am unsure if they are using their real names. I’m hoping that people who know these folks will come forward.