It being April, the ancient Roman “Tax season” that for some reason remains “tax season” in both the US and Canada, I am quite aware of deadlines right now. So it came as a bit of a shock to check out the SEDI page for NioCorp. SEDI shows insider stock, bond, option and warrant trades by insiders of Canadian listed companies. NioCorp is a junior miner trying to build a niobium mine in the US. As Otto has harped on a bit this week, Tommy Humphreys’s CEO.ca site was or maybe still is a paid promoter of Niocorp. (Not that Tommy hid that. Check out the 1,827 words of disclaimers and cautionary notes on this page, where the main article is just a video and 118 words of text.)

James “Casey” Forward (not to be confused with football player James Casey, or Louis James of Casey Research) was CFO of the company until a couple weeks ago, when there was one of those cryptic separation statements:

Effective immediately, Mr. Neal Shah has been appointed to the position of Interim Chief Financial Officer.… In order to accommodate these changes, the Company has accepted the resignation of Mr. Casey Forward, who is stepping down as CFO after many years of service to the Company. Casey will remain with the Company during a transition period. Niocorp recognizes Casey’s valuable contributions and wishes him well in his future endeavors. In addition, Mr. Peter Dickie has resigned his role as Corporate Secretary, which the board has accepted. He remains in the position of President.

Having talked to Neal Shah, he says Forward has been spending lots of time on NioCorp and wants to go back to his life, be with his family, that’s fine. But the statement did get me wondering about whether he had been buying or selling shares ahead of the disappointing preliminary resource estimate disclosed this week. After all, there was a bit of a nice pump last year (on the old NB.v ticker):

and a bit of a dump this week (on the newish NB.to ticker):

Monday and Tuesday were niobiummers! But the stock is still up something like 8-fold in 18 months, which is better than a stick in the eye.

So I finally take a look at these SEDI filings and I see that this guy Forward loves to file late.

As I understand them, SEDI rules are pretty easy. If you’re an insider, you need to disclose holdings changes within 5 calendar days. I’m no lawyer, but this is not complicated:

CANADIAN SECURITIES REGULATORS INFORM ISSUERS AND REPORTING INSIDERS ABOUT ACCELERATED FILING DEADLINES, FROM 10 CALENDAR DAYS DOWN TO FIVE, STARTING NOVEMBER 1ST, 2010. A new, harmonized insider reporting regime for Canada became effective on April 30, 2010 in the form of National Instrument 55-104 Insider Reporting Requirements and Exemptions and the related Companion Policy. After a six-month transition period ending October 31, 2010, the filing deadline for reporting insiders to report changes in their holdings is being tightened to five calendar days from the current filing deadline of ten calendar days (initial reports will still be subject to a 10 day filing deadline).

So how is Mr. Forward doing? He’s had almost 300 insider transactions since he started reporting to SEDI in 2001. Forty-seven of those have been since Oct. 31, 2010. Here’s a histogram of how long it takes him to file. This chart shows how often he filed with SEDI less than 10 days after the transaction, how many times it took 11 to 20 days, etc. 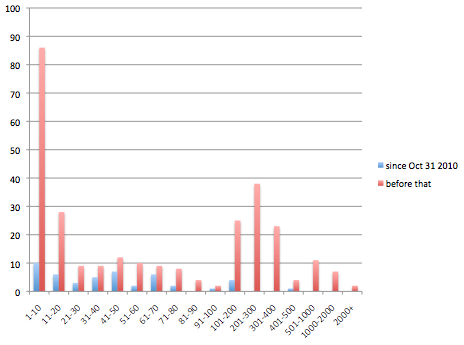 The good news is that there was only one instance when it took him more than 2,000 days to complete a filing. The bad news is that even since the filing deadline was condensed to five days, he has still taken more than 10 days to file more than three quarters of the time. And yes, some of these filings were initial position statements, and sure we all forget to file a document now and then don’t we? But this is pretty extreme.

Anyway Forward, along with a bunch of other NioCorp execs, just filed SEDI disclosures in March, and they were almost all late. In fact, Peter Dickie appears to be the only insider at the company who knows how to timely file. Everyone else — everyone — was late. The median delay between transaction and filing was 43 days, the mean was 78 days. This is like how I treated my taxes for a few years there. Unfortunately I had to pay huge penalties. Now, I don’t mean to overplay this; it’s not super-important. But as I said to Mr. Shah, these filings are easy, and I’d hate to think the company treats all regulations in such a cavalier manner.

Shah said that he was unaware of any such issue. He said the company has historically left it to individuals to deal with these filings, and only recently started giving more responsibility to its law firm. So, I guess that means they will get better.

I’ll let you know if I hear anything else back from them. NioCorp is planning a Q&A on its PEA Monday, should be fun.

Mr. Forward didn’t respond to a message left with his office in Vancouver.