Back in March, Area Minera had this fascinating article about how Pacific Rubiales Corp.*, Colombia’s biggest private-sector oil company, had moved into an unexpected line of business. Here’s a bit of it translated for your pleasure:

… the biggest surprise is how the owners of Pacific Rubiales Energy have decided to enter mass communications. Today, they hold 19% of the stock of the channel Cablenoticias, property of their countryman Alberto Federico Ravell. Until a few days ago, they had shares of the daily El Tiempo, but sold their property to the banker Luis Carlos Sarmiento. They are also frequent advertisers in well known radio, print and television outlets.

(* Update: To be clear, they are talking about the owners, not the company. I don’t know if the company itself has any media holdings.)

Semana Magazine announces that “as part of our 30th anniversary celebration,” it will bring “to Colombia the world’s most recognized media editors and publishers,” and affirms that it will be an “event that debates the future of the media and their relation with power.” The “international forum” is organized with the “support” of the oil giant Pacific Rubiales.

Given the title “The media, their future and their relation with power,” one has to ask whether Semana, as a medium of communication, will one day pursue investigative journalism regarding the power of a company like Pacific Rubiales.

In the celebratory edition of the publication, Daniel Coronell deditcated his opinion column to the journalist Ricardo Calderón. He said that “he has been and is one of the best in the business,” and explained that “for his work he has had to tolerate, in altruistic silence, death threats and attempts to undercut his reputation. He has also been awarded 12 prizes in Colombia and abroad. He has lived through boom times for investigations at the magazine, and other times in which there is less demand.”

All very good questions. I wonder if any were posed to the journalistic luminaries at the event last night in Bogotá. Among those slated to attend:

UPDATE Sunday Sept 16: Looks like a lot of those folks got to rub shoulders with their sponsor for the evening. See photos here. For extra credit, try to find ones lacking a Pacific Rubiales logo or executive. Here are Alejandro Santos of Semana, John Mulholland of The Observer, and Phillip Bennett, managing editor of the Washington Post. The Post, coincidentally, has never breathed a critical word about Pacific Rubiales* and mostly writes about the company’s golf tournaments. 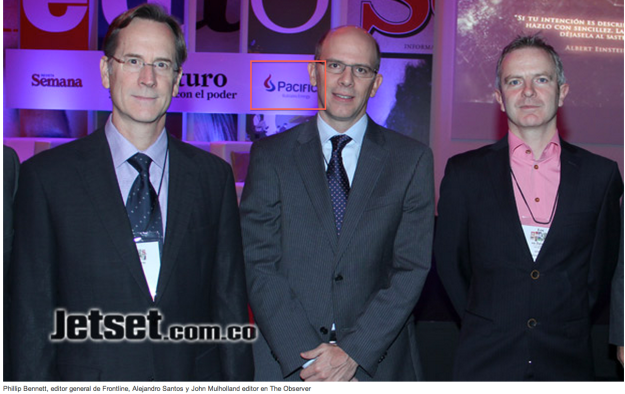 *The Post even managed to run a puff piece about the company datelined “Puerto Gaitan” last September, during massive strikes against the company in that town, without ever mentioning the labor unrest, instead talking only about Hugo Chávez, what a loser for firing these brilliant men who now run Pacific.