Today is the 40th anniversary of Chile’s nationalization of the copper industry. On the one hand, this overtly socialist act — giving the masses ownership of the means of production — may have been a death warrant for President Salvador Allende. On the other hand, it was so popular in Chile that Allende’s successor, General Augusto Pinochet, never dared re-privatize the industry. At least not officially.

So why are there are so many private copper mines in Chile today? The national company, Codelco, continued to exist, but never grew. It stuck with its fantastic but aging properties. The company could never hang onto enough money to reinvest and enhance production, as cash was diverted to other government needs. Pinochet began the process of inviting in private companies, both local and foreign, to invest in new mines. The process continues to this day.

Still, nationalized copper remains a winning issue in Chile. For all of the country’s reputation as the right-wing bastion in South America, everyday people have an ingrained socialism. Remember, current president Sebastian Piñera is the first person to the right side of the spectrum to have won an election in this country since before Allende. It was 1958 or 1964 (depending on how you count left and right) the prior time a rightist party took the presidency in an election. 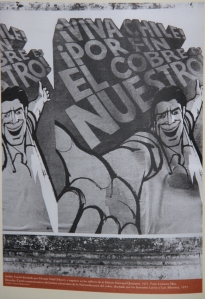 Today, it’s a hot button once again. Student marchers are demanding nationalization, and/or higher taxes on private companies, to increase the education budget and bring back to Chile something that already exists in Mexico, Venezuela and many more Latin American countries: free higher education. They say, when the country was poor, education was free. Now the country is rich, and education is expensive.

Obviously, Piñera won’t be the one to dramatically raise mine taxes or to embark on a Chavez-style frenzy of “¡expropiase!” But the demands are growing.

Today at 5 am, some 15,000 union workers and 30,000 lower-paid contractors will strike at Codelco to protest the “undercover privatization” of the company. By all accounts much of their concern is fear of the private-sector mentality of company president Diego Hernandez, who was hired from miner BHP Billiton.

The strike will also apparently be joined by students and public sector workers. The government is trying to stoke anti-strike sentiment (wow, a preemptive strike against a preemptive strike?) by pointing to the country’s financial losses from the action and the relatively high pay of mine workers. But I think with the students on their left flank, and wide public support for student demands, we could be seeing the bubbling up of a new wave of resource nationalism in Chile.